The flu bug has struck our home. My poor husband and brother were miserable. They looked like they were sick. My sister-in-law has been ill too. I think the flu skipped me, but I have been sick too. The doctor said mine was unseasonable allergies, but he prescribed the good stuff, since I already was taking the allergy medicine he was going to prescribe. So I got Prednisone & a Z-Pack. 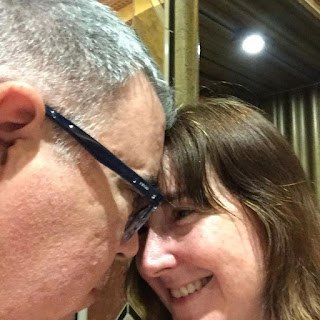 It has been cough city here in the Trushaw/Kelly household. I am surprised any of us got any sleep. Finally, after a weekend of cancelled plans, we are on the road to recovery.

Being sick made my Ménière’s Disease worse. My head has felt like it was weighted down. When I moved the world would appear to sway or dip. Throw in an occasional spin and that has been my world. Since I was “not sick”, I became my husband’s caregiver. Making him tea and taking his temperature, getting him Tylenol.. Anything to get him on the road to recovery.

Unfortunately for him, it made me irritable and not fun to be around. Noises have been amplified and it makes my ears hurt. I was asked if this was a new development. To which I replied no. I usually ignore it or subtly adjust the volume on radios and tv. The illness has made it worse though.

It’s difficult not to whine and I really do try to act as if everything is normal. But there are times when I can’t. Fortunately, I haven’t had the constant spins or drop attacks that I had when I was first diagnosed.

Fortunately, we are on the road to recovery and we can resume our regular life. I hope you are staying healthy.

Love, Peace and Light!
Rita
Posted by My crazy life at 4:18 PM