Ménière’s Disrase - What is it?

I feel as if I should explain what Ménière’s is...  I have been talking about it, but have really said much about it. It is basically a debilitating inner-ear dysfunction, but what does that mean?

For me it started with tinnitus. At first I would hear music over and over, but not constantly. I’m not sure when the music stopped and the continuous buzzing began. It happened sometime when the locusts were inundating our town. It was winter when I realized I still heard them, but they had died off. So my ringing sounds like locust, though higher pitched at times and it’s ever present.

Then the dizziness began. There were times I could not get out of bed because the room was spinning. In between these episodes, I would get the feeling of tipping over, or lightheaded feeling. The most unsettling thing was a drop attack, where I fell down for no reason at all. Also, unsettling, was getting slammed into walls. These might have been drop attacks, but I had a small house, so I hit walls when I was slammed backwards.

Nausea accompanied the dizziness. Stress made it worse. It was very stressful calling off work or leaving early because of the dizziness. I quit my job. I stayed in bed most of the time for almost two years. At some point, the symptoms lessened to where I only tip a bit here and there. The ringing has not ceased. 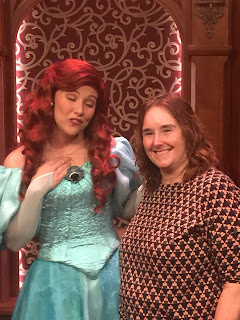 Unfortunately, my dizziness returned along with nausea at Disneyland. I thought I was going to have to go back to the hotel, but I managed to sit for an hour or so and they subsided. I enjoyed the rest of the day. (Pictured above: Ariel and me.)

The important thing to remember if you or a loved one has this awful disease is that it’s different for us all. I hope this helps you to understand what I go through at times and what others may be going through.

Love, Peace and Light!
Rita
Posted by My crazy life at 8:23 PM