Since my first cruise in October 2013, I have been bitten by the cruise bug. Here we are on Carnival Liberty dressed for formal night. I knew then that Ralph and I would have an adventurous life together and we have. 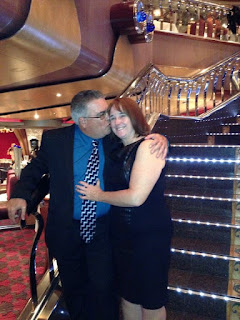 We have been on four cruises so far, including our port packed southern Caribbean cruise on the Carnival Fascination last May. 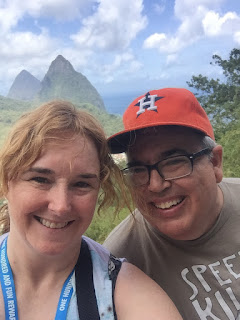 Here we are in St. Lucia in front of The Pitons. We took an island tour. My sweetie was a trooper, since he was still recovering from a broken leg. (He broke his fibula & tibia.) We’d have to go back to the cabin early so he could put ice on it to take the swelling down. That did not stop him from being cheerful or doing activities, which we kept to tours of the islands.

Our next cruise is coming up in April to Cozumel and Progresso. Since we have been to Cozumel, we will be going to Mr. Sanchos Beach Club as we did in May of 2016. We are still debating for Progresso Yucatán. I want to see the ruins, but it is an all day event.

A couple of days ago, I found a great deal on a cruise to Cuba. So, I am going to book it tomorrow. It’s on Carnival Paradise which is a small ship. It is the same class as our honeymoon cruise, but it is supposed to be getting upgraded next month. I really enjoyed the smaller ship. There is less people and it’s easy to get around.

This will be the first time we’ve taken double cruises. I wish we could take more than one all the time, but one of us works. Ralph wants to get some camping in this year, but this second cruise might change his plans.

The one thing that concerns me is the resurgence of my Ménière’s symptoms... how will my inner ear react to being on a ship? In the past it has not been bothered at all. Wish me luck.

Have you been on a cruise? If not do you want too? I used to think I couldn’t afford it, but you can put down a deposit and pay off over time. That is the best part and once on board you eat free. It is more cost efficient then most vacations.